Last Saturday the circle expanded with 22 adults and 11 kids… and started thinking about smaller, home groups. We are now getting past what even a large living room could handle. But we all learned a couple of true things, and one “fake thing”, about each other. That was interesting…:)

Our break-out discussions were on our next word for RE-defining: LEADERSHIP. We batted around whether you have to be a good follower in order to lead well. We also took time to take care of each other and pray for each other – from new people to core team, it generally felt like “family”. Here are some pics from the m

eeting:
Kids are with us most of the time, but when we go into teaching and break-outs, they have their own things to do… 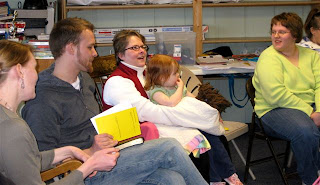 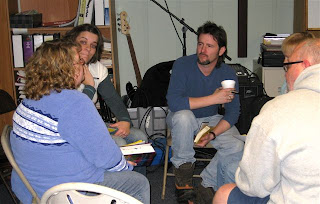 You know, it was really a radical thing Jesus did when he made His cousin John baptize Him. John knew He was the Son of God, and tried to pass on the whole thing; but Jesus insisted on being a “follower” of John first, and a follower of the prophets who spoke for His Dad over the centuries. It had nothing to do with who was greater or smarter, or worthy of being followed – He came under John and the prophets so to carry the authority of John and the prophets, that the leaders who would kill Him could not rightly accuse Him of rebellion, or discounting those God had used in the past. He followed them, and then He followed His Father.

In John 5:19 Jesus says,”Truly, truly, I say to you, the Son can do nothing of Himself, unless it is something He sees the Father doing; for whatever the Father does, these things the Son also does in like manner.” In other words, Jesus never had an original idea – it all came from His Father as He “shadowed” Him through life. We have a hard time following – though it would be hard to argue with the idea of following God, we would have all kinds of objections to following people; whether they were prophets, pastors, teachers or whatever. We don’t want to give anyone that kind of influence in our lives. Yet, as Jesus followed His Father, He also insisted on following people whom God had used to accomplish His purpose – even though they were far from perfect.
So how do we re-think personal boundaries for people and leadership: Not to give anyone too much power (“anyone who has left father or mother…), but allowing God to lead us through people at the same time? The best we have come up with so far is to follow the lead of Jesus in others. To follow each other as we follow Him. We all need God “with skin-on” in our lives, but we know that no one is perfect. So, being patient with each other, we look for God’s influence in each other’s lives. What an adventure.
Posted in Mission-link